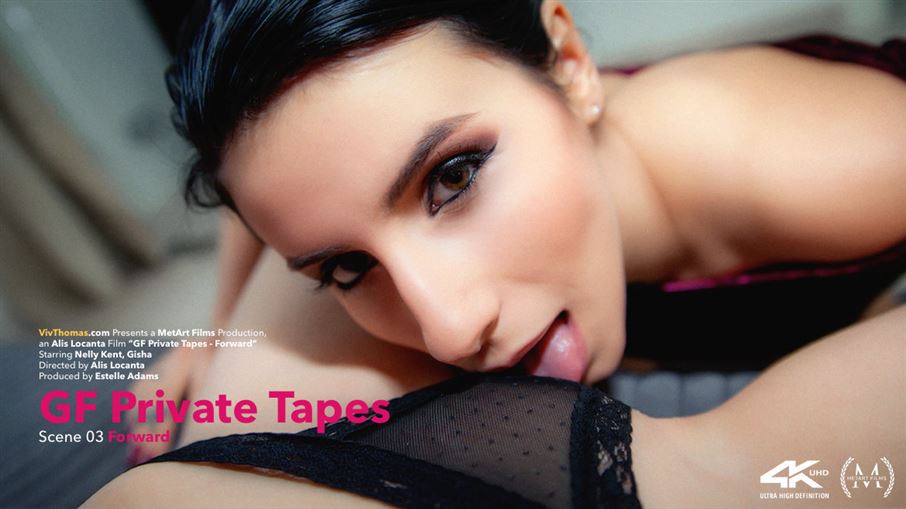 Passionate lovers Nelly Kent and Gisha make a sexy POV home movie in episode three of Alis Locantas sensational GF Private Tapes. Nelly shoots some voyeuristic footage of her girlfriend Gisha as she gets dressed, before leading her into the bathroom and stroking her pussy through her tight black panties. Back in the bedroom, Gisha plays with herself for the camera, then takes control of the filming as Nelly fondles her beautiful big breasts, sucking the nipples stiff, then goes down to eat her shaved pussy. Gisha moans as Nellys tongue explores her pussy, growing louder when her eager girlfriend adds her fingers, rubbing her clit hard. Nelly resumes filming, so she can get a full frontal view of her finger play as Gisha goes face down, encouraging her to strum her own clit until she orgasms. Now Gisha films Nelly tugging her black panties up inside the soggy slit of her shaved pussy and sucking on her big breasts. Nelly goes wild as Gisha spays her puffy pink pussy open and licks her voraciously. They balance the camera on the bed so Gisha can concentrate on making her sweetheart orga…