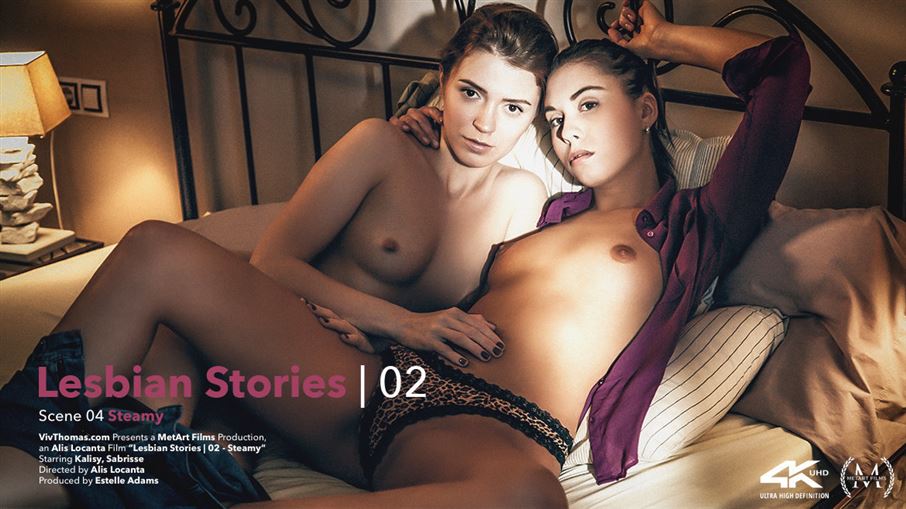 Sexy Sabrisse is jealous that her girlfriend Adel C is having sex with their cute roommate Kalisy despite having cheated with Kalisy herself as episode four of Alis Locantas sizzling Lesbian Stories Volume 2 begins. She drags her gorgeous redheaded girlfriend out of the bathtub, but a moment later she sneaks into Kalisys bedroom and starts kissing her. Sabrisse yanks away Kalisys towel, sucking and squeezing her perky breasts roughly, then diving between her legs to lick her hot pussy. As Sabrisses tongue darts in and out of her honey hole, Kalisy moans loudly, grinding against her stunning roommates mouth. She gets even louder when Sabrisse thrusts two fingers frantically in and out of her pussy. Sabrisse takes off her jeans and panties and straddles Kalisys face to get her shaved pussy eaten, bucking wildly as she rides her probing tongue. She leans forward into a sixty-nine, fingering and licking Kalisys sopping wet pussy as she gets eaten voraciously. Sabrisse comes up to kiss Kalisy passionately and then lies back to get eaten again, Kalisy frigging her avidly as she laps at he…